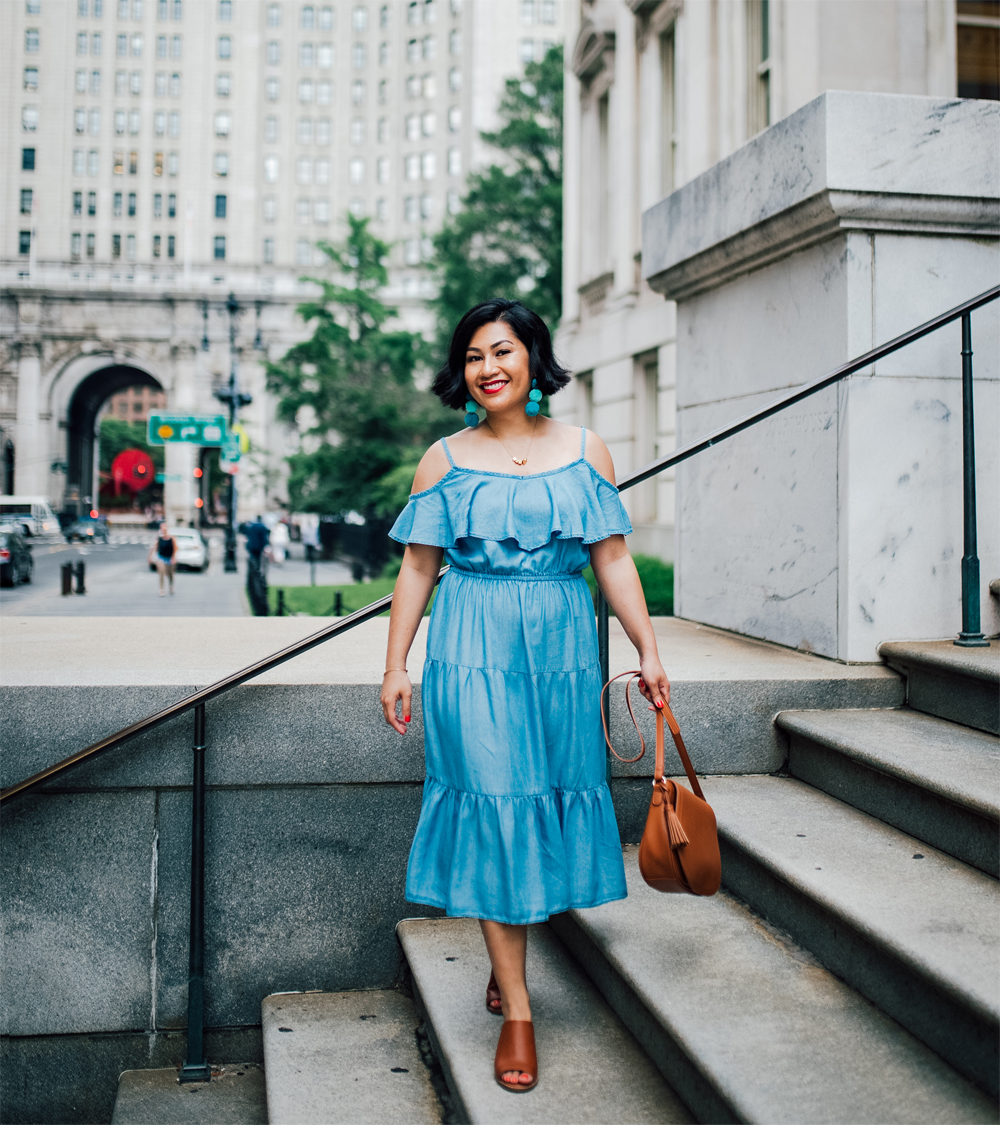 In my five years living and being a blogger here in NYC, I’ve developed a pretty nice reliable roster of the places I like to shoot at. This list is just a first taste of more post like this to come, because honestly I can write an entire site’s worth of content just on cool places to take photos in the city.

Goes without saying that while these places make for great shoot location, they’re better at one time than another. If you want to play it safe, I recommend going at odd hours or early in the morning. Plus you get the “golden hour” light at that time, so bonus point for you! For those of you who are not local to New York, it’s important to familiarize yourself with the neighborhoods of the city before deciding on a location. Unless you’re planning to UBER everywhere, keep in mind that it’s much easier to travel north-south than east-west. If you’re here for NYFW, for example, you might want to stick to shooting location that’s on the west since, since that’s where most of the shows are.

TWEED COURTHOUSE STEPS
Financial District (52 Chambers St.)
Why it’s great: This location is great in general because there are tons of different places and color schemes within a (fairly) short walking distance. You can start here and get the grays of the steps and building, walk over to the park to get some greens, and finally head over to Brooklyn Bridge for the browns and iconic view. But don’t even think of doing the last part unless you get here very early.
What’s the crowd like? The courthouse itself should not be an issue, barring any protest or special events going on there. I’ve really only been here early in the morning and on weekends, and both times it’s not crowded. And even when there are people around, it would not be difficult to find an angle for a good photo.
Other shoot locations nearby: City Hall, Brooklyn Bridge

WASHIONTON MEWS
Greenwich Village (5-11 Washington Mews)
Why it’s great: Washington Mews is a private street that’s closed off to car traffic, unless you happen to be one of the lucky NYU faculty that live there. The town homes on these road are beautiful and there are door candy galore for you to take photos in front of. It could make for a great back-up location for taking photos at Washington Square arc, which can have unpredictable crowds. The day we were supposed to shoot there, we couldn’t because they shut down the entire park to shoot a movie.
What’s the crowd like? Barring the occasional foot traffic, this place is pretty much dead.
Other shoot locations nearby: Washington Square Park, SPINA, MacDougal Street 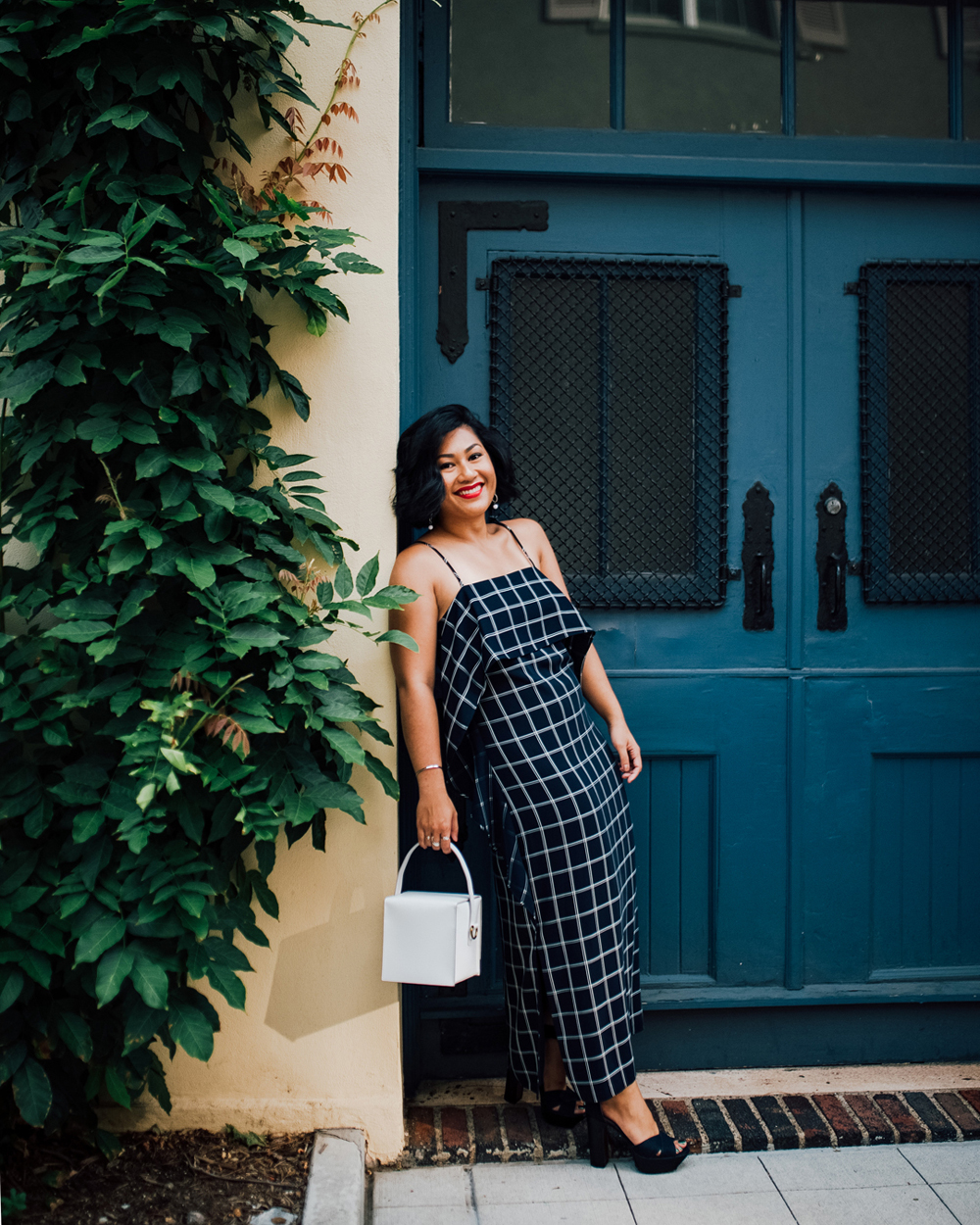 SPINA
Greenwich Village (176 MacDougal St.)
Why it’s great: Sometimes you just need a good plain wall to take a photo in front of. I just love the simplicity of the SPINA store facade, which makes for a great backdrop for taking photos of all-black outfits.
What’s the crowd like? Some foot traffic, but its very manageable especially if you shoot at odd hours.
Other shoot locations nearby: MacDougal Street, Washington Square Park 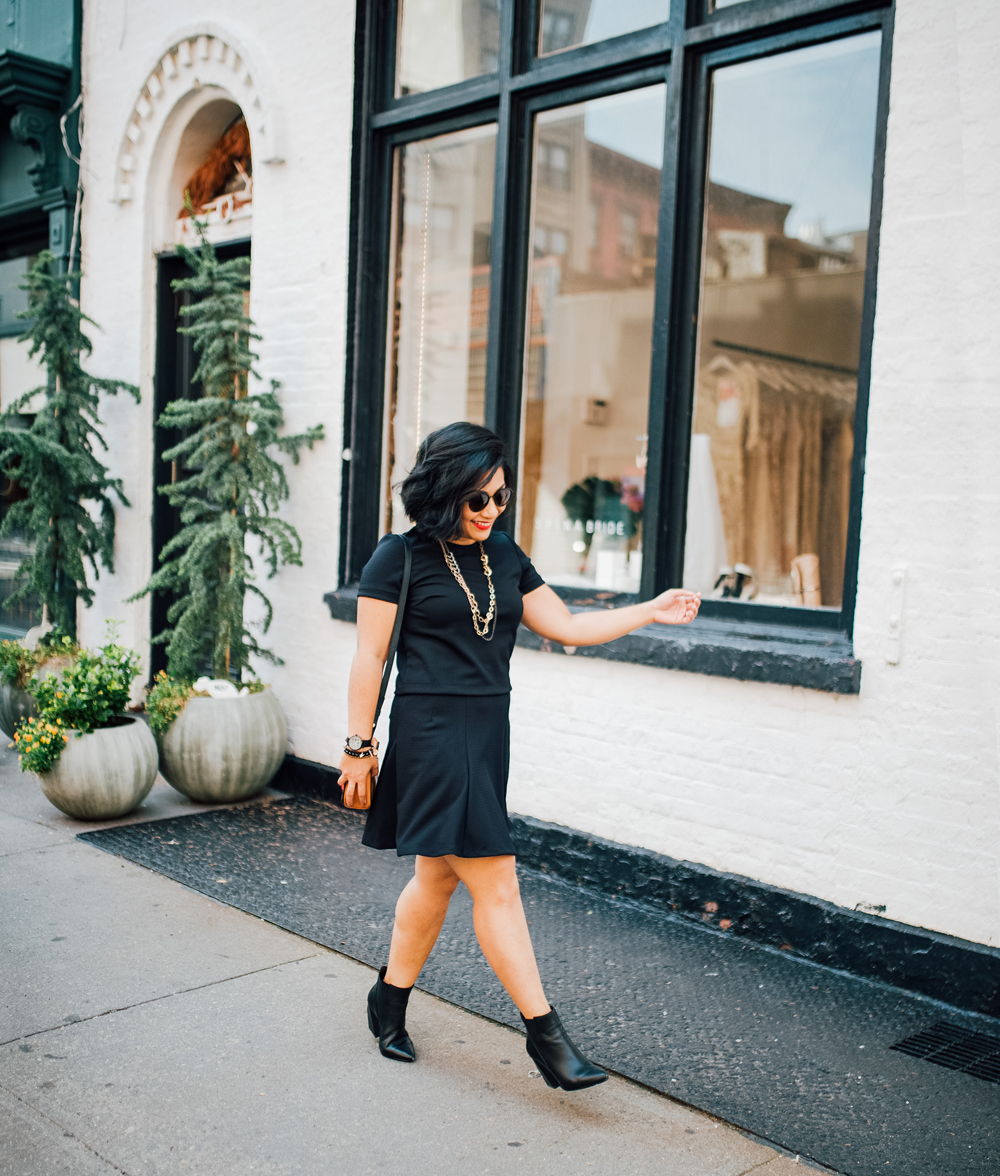 FREEMAN ALLEY
Lower East Side (Rivington, between Bowery and Chrystie)
Why it’s great: This is probably the most reliable all-day all-season shoot location. By virtue of it being a wide alleyway with 1-2 story tall buildings surrounding it means that it has even lighting all day long. There is a restaurant at the end of the alleyway, which blue door and string lights provide for a beautiful photo backdrop. There are also graffitied wall along the alleyway for alternative background.
What’s the crowd like? The alley is closed to motor traffic, so you pretty much mostly need to contend with people coming in and out of the one restaurant at the end of the alleyway.
Other shoot locations nearby: Murals at Mott and Kenmare 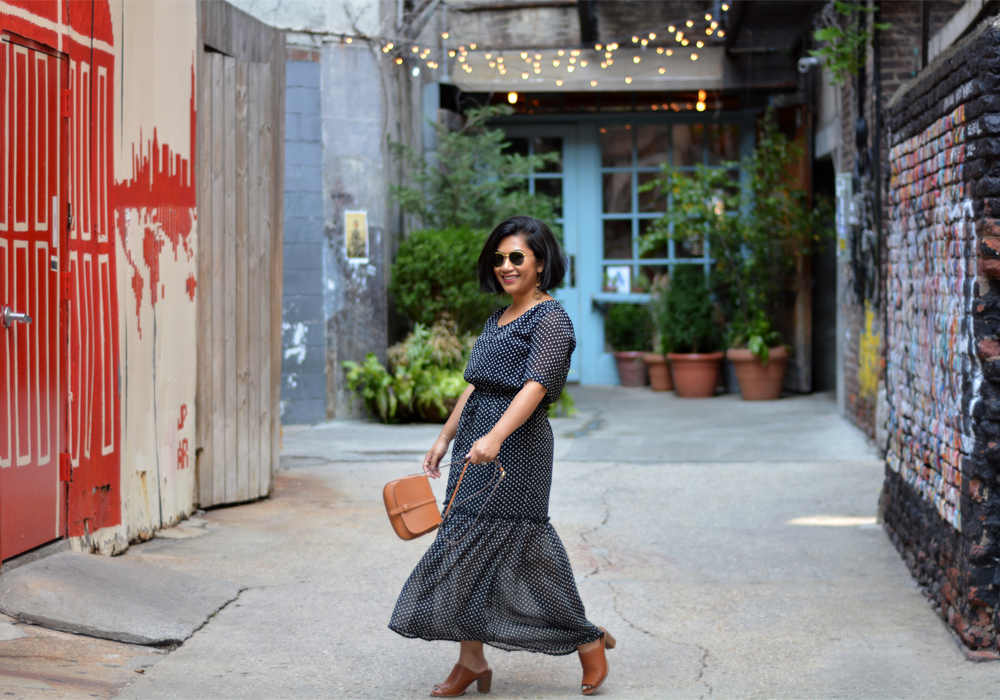 MURALS AT MOTT AND KENMARE
Nolita (Mott & Kenmare)
Why it’s great: If you’re into colorful murals as your photo backdrop, you’re in luck. New York City is full of murals and one place you’re sure to find this is on Mott & Kenmare. But don’t get attached to any of the murals you see already posted on Instagram because the mural arts are transitionary by nature and might change by the time you get here.
What’s the crowd like? May be a lot of foot traffic depending on the time of the day you get here. But don’t sweat it: you’re not the only one taking a photos in front of the murals, so people are typically polite and go around you when they walk by.
Other shoot locations nearby: Freeman Alley

CAFÉ MEDI
Lower East Side (107 Rivington St.)
Why it’s great: This café is super cute and for some reason is never overcrowded (a rarity for NYC). It’s Instagrammable both outside and in, since the ceiling light provides lots of natural lighting even when you’re taking photos inside. The café is attached to a hotel that has a teal facade, which will contrast beautifully with light colored clothing. I recommend shooting here if you’re trying to make any blog content related to brunching.
What’s the crowd like? I’ve been here a few times for brunch and oodly it’s never croweded. Hoping it will stay that way. 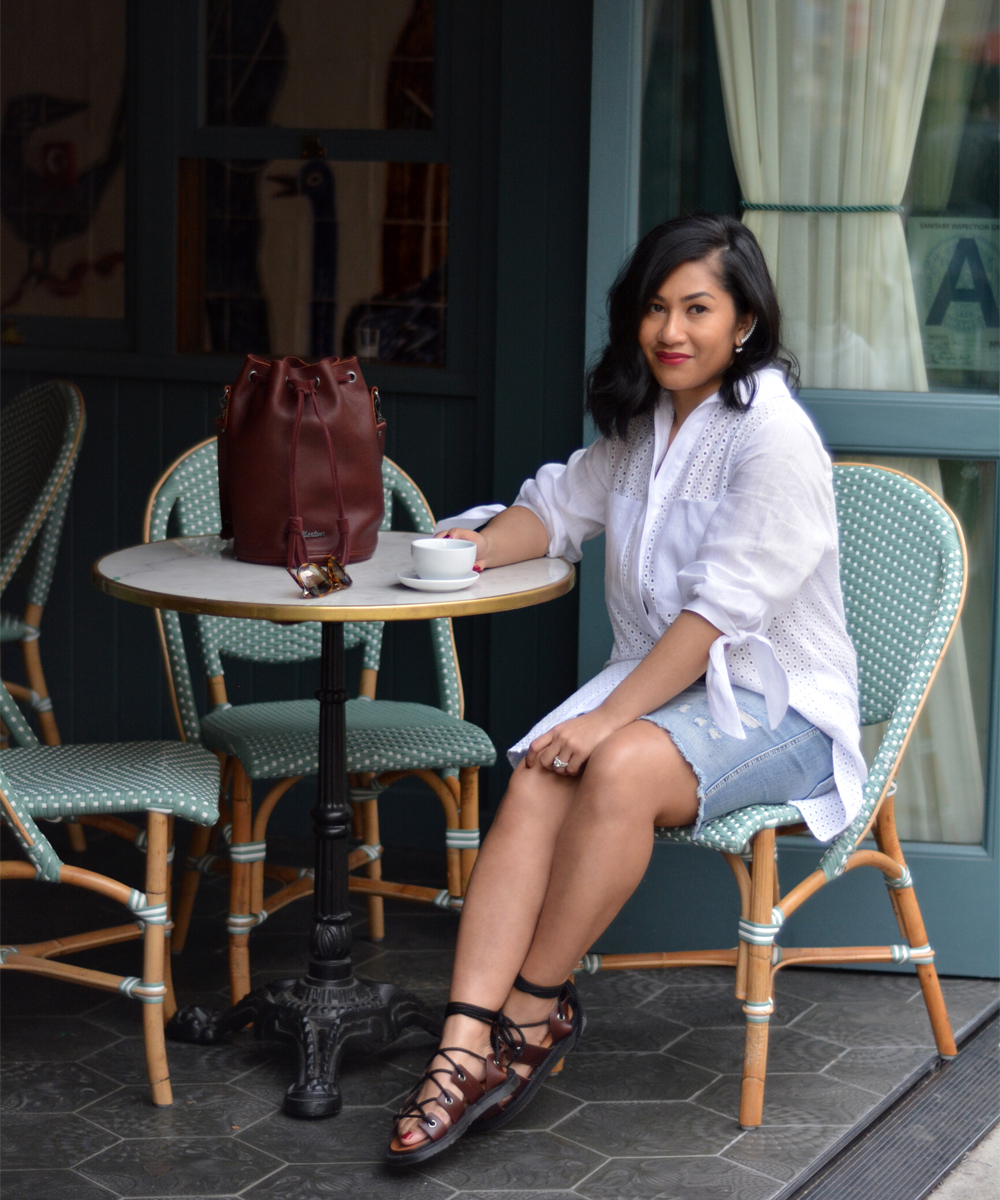 WILLIAMSBURG BRIDGE
Lower East Side / Williamsburg (Williamsburg Bridge)
Why it’s great: First of all, it’s pink! I love the contrast of the color and the gritty feel of the metal construction, which makes for a very interesting backdrop. Plus there are always interesting chalk art drawn along the way. The pedestrian walkway portion of the bridge is split in two and if you can invest the time to walk all the way to the middle of the bridge, you’ll be rewarded with a great place to shoot where the two parts connect.
What’s the crowd like? It’s less popular with the tourist than it’s sibling, the nearby Brooklyn Bridge, which is a good thing because it means that there are a lot less people (i.e. tourist). You’ll have a few walkers and some joggers, but that’s really it.

HIGHLINE
Chelsea (99 Gansevoort St.)
Why it’s great: Highline is an elevated park that’s approximately 1.5 miles long, so there are tons of area where you can take a photos in. My preference is to enter and take photos at the south end of the park, near the Whitney museum. This way I can shoot upstairs on the actual park and also switch location and shoot downstairs by the Whitney Museum. Bonus points, if you decide you want to visit the Whitney also, they have a great rooftop which provides lots of photo opps for a $22 entry fee.
What’s the crowd like? It can get VERY crowded with tourist on the weekends and holidays, so definitely plan to shoot here early morning or weekdays. Keep in mind that the Whitney museum at 10:30am, so plan accordingly if you want to finish the shoot by visiting the museum.
Other shoot locations nearby: Whitney Museum

40 BOND
SoHo (40 Bond St.)
Why it’s great: It has a super cool facade that makes you think you’re in Barcelona (and makes you wish you got $3mil pocket change to buy a two bedroom apt here). Be sure to finish off the shoot with a meal and drink at The Smile across the street.
What’s the crowd like? Since this street is not a major thoroughfare, the crowd is typically pretty thin any time of the day.
Other shoot locations nearby: NOMO SoHo 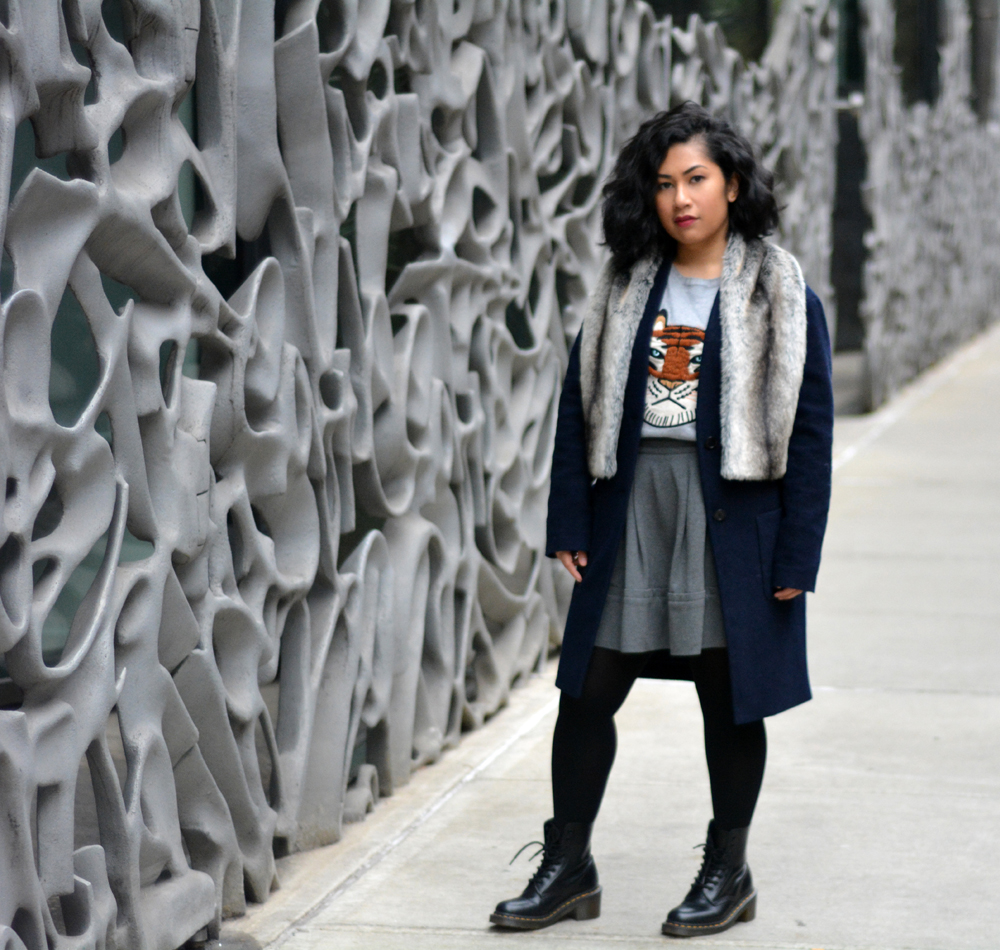 NOMO SoHo
SoHo (9 Crosby St.)
Why it’s great: There are shooting opportunities galore at this location, it’s almost like it was made for bloggers and Instagrammers in mind. On the front of the hotel, they’ve got the arched vine walkway, which I’m sure you’ve seen on Instagram at some point. They also have a beautiful restaurant within the hotel that you might have seen on a Cameron Diaz movie. Crosby is a cobblestone street which makes for a great #squadgoals walking shot. Walk to the back of the hotel, on the Lafayette St. side and you’ll find an edgy mural to pose in front of (pictured below).
What’s the crowd like? The front part of the hotel will be more crowded than the back. Even though it’s manageable any time of the day, I recommend going at odd hours if you’re looking to shoot on the archway.
Other shoot locations nearby: 40 Bond 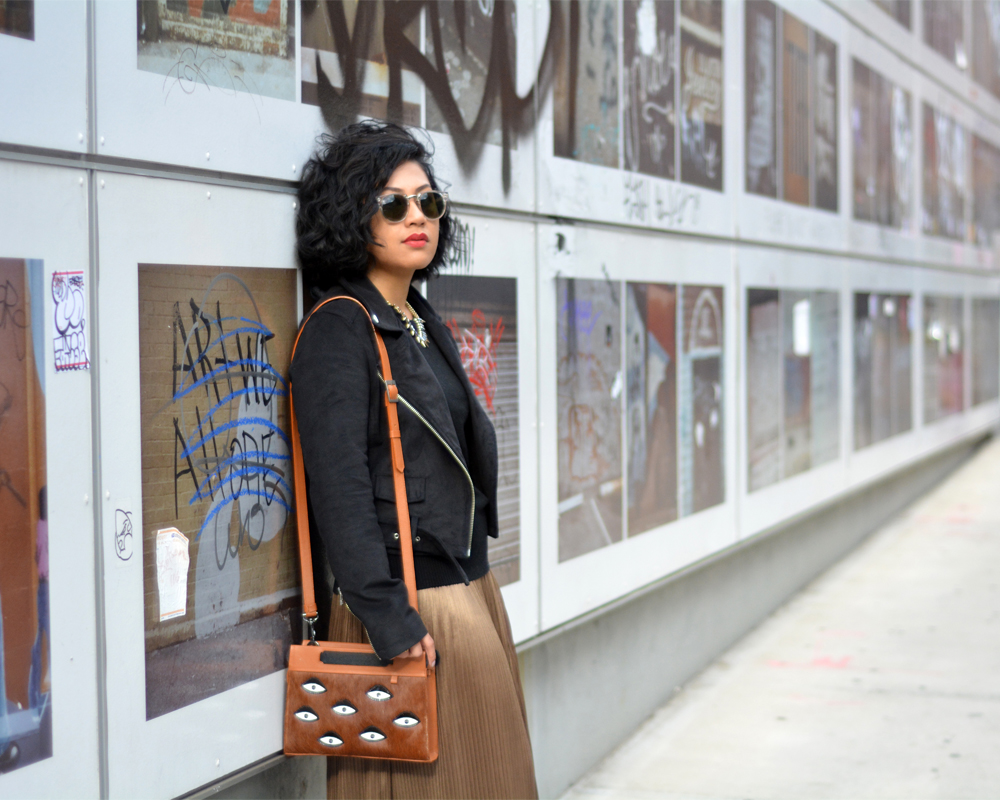 SHOOTING LOCATION WISH LIST
These are places that I’m planning to shoot in one day, but I haven’t gotten around to it yet. But that doesn’t mean that you shouldn’t try it before me!

An Ode To Wrinkle Free Dressing