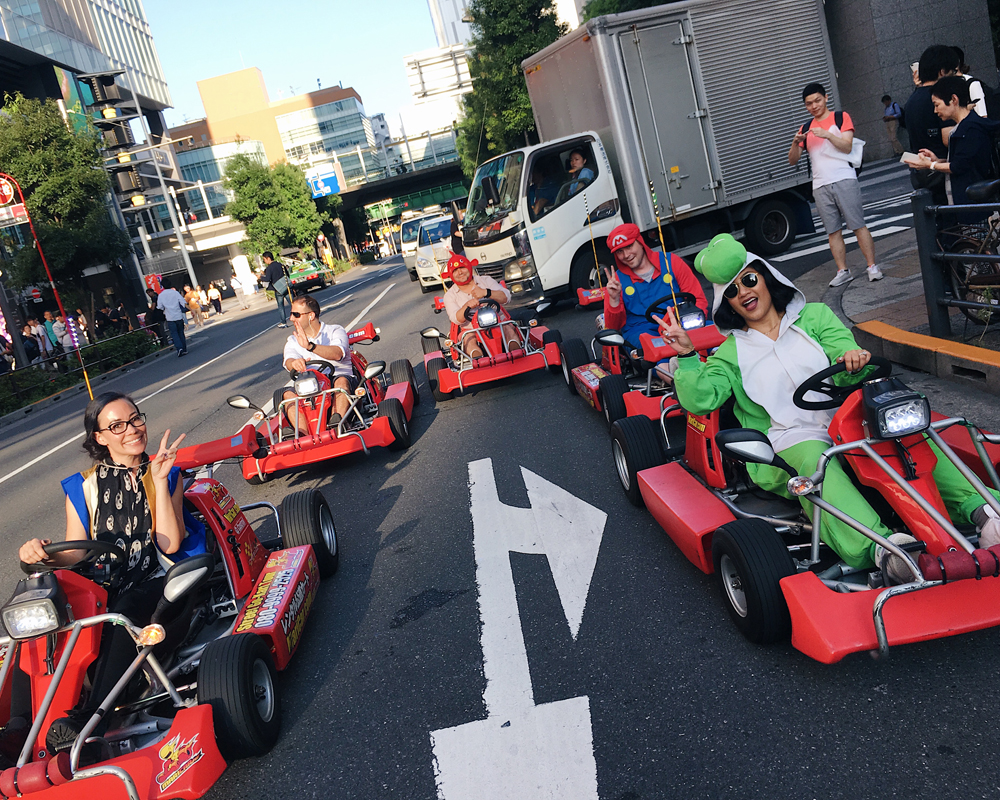 Oh Tokyo, what a wonderful city you are. You may play second fiddle to Kyoto, my favorite vacay spot in Japan, but that doesn’t mean you’re not fun. Hell, the funnest time I’ve had in Japan, hands down, is playing real life Mario Kart down the streets of Tokyo.

Just like Kyoto, the attractions of Tokyo are pretty spread out (probably even more so). So get ready to either shell some money on Uber or walk a whole lot. This trip is going to leave your feet tired, your belly happy, and your heart full. Without further ado, let’s get down to business and list out my favorite places in the city.

ROBOT RESTAURANT
The Robot restaurant gets a lot of bad rap about being tourist trap. Now I’m not going to dispute the fact that it’s touristy — it definitely is. If you note the crowd of people going, you’ll find that most people are noticeably foreigners. But I disagree that it’s a trap. Well it kind of depends on what you’re into, really. I happen to be one of those people who enjoys the kitschy appeal of Medieval Times. And Robot Restaurant is basically the Japanese version of that kitschiness. I put it first on the list not because it is my favorite thing, but rather because it’s probably most appropriate activity for the first night in Japan. We were so tired and travel worn from the long flight, I can’t imagine anything else other than the craziness of this show would have kept our attention (and our wakefulness). Despite the fact that it was very obviously designed for tourists, the show was a lot of fun nonetheless.
We purchased a Robot Restaurant / Alice in Fantasy Book combo through Viator, which was a mistake. Whereas Robot Restaurant is weird in a fun kooky way, Alice in Fantasy is just straight up odd. The music, a combination of poorly sung nursery rhymes and Disney soundtrack, was really off putting. The food, compared to all the other delicious cuisine I had while in Japan, was barely edible. The place touts itself as being highly Instagrammable, which was supposed to make up for the lack of quality food and music. But alas the poor lighting inside means you are unlikely to come out any Instafodder shots. So do yourself a favor and skip the Alice In Wonderland part.

MARICAR
This, by far, is the highlight of my trip. We almost didn’t make it because it rained quite a bit while we were in Tokyo. Luckily the rain left us on the second to last day we were there. I’ve got to warn you that this is not for the faint of heart. You are driving the go-kart, on actual real Tokyo roads (read: with other cars) and not in the controlled environment of a race track. And depending on which route you take, you could be driving quite fast — or maybe it just feels that way to me since I’m in go-kart that’s super low to the ground. I was definitely flooring the gas pedal while going over the Rainbow Bridge. According to MariCAR specs, the go-kart can go as fast as 60 kmh. To be honest, it was really nerve wracking at first, but you get used to it really quick. I should also mention that Japanese drivers are probably the most polite I’ve ever encountered in my life. Unless we’re stopped at a red light, we drove in a single file most of the time. So there are six of us in line, including the tour leader. And not once did I encounter an impatient driver that wanted to cut us off. That probably would not happen anywhere else in the world.
Since it is MariCAR, after all, the experience wouldn’t be complete without some Mario costume, which comes with the tour fee. If you’re on the taller side, be prepared to have some high-water costumes. But don’t worry, it’ll still look good for the photos.
Keep in mind that having an international drivers license is a requirement to do MariCAR, and it’s surprisingly pretty easy to get. All you need to do is take two passport photos, and a copy of your drivers license and passport to your local AAA to get it “translated” to an international license for a $20. You don’t even need to get it yourself. You can have a concierge service or a really good friend do it for you.
Although it’s recommended that you make a reservation on their site, it’s not required.

HARAJUKU
There are tons and tons of things to see and do in Harajuku. It’s one of those great places to get lost in. Although I must say that I find the crowd in some places, like Takeshita Street, to be irritating and reminiscent of Times Square in New York. So if you’re adverse to slow moving crowds, mentally prepare yourself before you get here.

TSUKIJI FISH MARKET
Tsukiji Fish Market is not for everyone. You probably should skip this spot if you are sensitive to fishy smell and gets easily grossed out by giant decapitated fish heads, because you will get plenty of them here. Oddly enough, even though I am sensitive to most strong smells, I am rather immune to fishy smells. I guess that’s what happens when you grow up around a dad that loves to go fishing.
Ok, so you’ve determined that general fishiness doesn’t bug you. The next step is to decide if you’re going to wake up early for the fish auction. If you decide to go, be prepared to wake up REALLY early. They only allow 120 people in per day — registration starts promptly at 5 a.m. and people begin to line up early.
Let me be clear that you do not need to go to the auction in order to enjoy Tsukiji. I’ve woke early pretty much every day of my trip in Japan but not 3 a.m. early, so I decided to skip the auction. The actual inner market opens to visitor at 10 a.m., so you’ll might want to come a bit earlier than that in order to enjoy the outer market. If you are planning on visiting the famed Daiwa Sushi, you better get there and start lining up at 10 am. We got there an hour late and they were already running out of fish for the day and stopped letting people get in line. But don’t fret if you don’t get into Daiwa, as there are tons of other alternatives (like Ichiba Sushi). You definitely shoul not leave Tsukiji without having a meal there.
Almost forgot: make sure you are dressed appropriately. No open toed shoes or sandals as you might be walking in fishy muck. Also plan to bring a jacket if you’re going to the fish auction since it will be cold inside.

SUMO TRAINING
Our travel group was super sad to find that we are barely missing the beginning of sumo season in Japan, as we really wanted to watch a sumo match. But luckily we found the next best alternative: watching the sumo wrestlers in training. Bonus: doing this also allows you to get more up close and personal than you would normally be able to during the grand tournament. Not to mention that watching a tournament is also free of charge. But that also means that you need to do the do the stable research and make arrangements yourself. Since I don’t speak Japanese and generally don’t want to bother accidentally doing something offensive, I opted to pay for a tour instead.

WHERE TO GET YOUR GRUB ON
Before I list out my favorite places to get a meal in Japan, I have to warn you that many of the restaurants are rather small and have communal seating. If you go in a group of larger than 2-3, be prepared to split the group and eat in waves. As I travelled in a group of five, I had to do this quite a bit of time.

Looking for more Japan trip guides? Check out my other posts:

How to Fit a Lounging, Play, and Office Space in One Living Room

How to Exercise (and Stay Sane) While In Quarantine